“7 Rooms 7 Artists” is an art exhibition in an old beautiful traditional mansion in Mar Mikhael, few meters away from the “Electricité du Liban” building. Set on one of the busiest streets of Beirut, the “abandoned” house that used to stand there like a black hole in the city came back to life on the opening night yesterday 31 May 2016 when visitors rushed in to see the beautiful installations but also to discover the space that held a tight dialogue with each work.

The house follows a typical traditional architectural plan where the rooms are organized around a central hall. 7 foreign artists who deliberately chose to live in Beirut exposed their works in the 7 rooms of the ground floor, each one reflecting his own vision of the city.

In “Despite all my rage: the Lamentations of Enkidu”, Lee Frederix recalled the epic of Gilgamesh and the untamed savage, Enkidu, who “neither knew people nor settled for living” until he was tempted by “Shamhat”, the “luscious one”, and went down to the great city where he “learned to drink wine, and be merry”. On the walls of the room, Frederix remodels mar mikhael streets with sticks of wood where everything seems at the same time chaotic and organized. “This is his city now”, just like Enkidu’s great city, a place of laugher, of continuous feasts with its pubs and bistrots, “where people show off in skirted finery, and where every day is a day for some festival”.

In room no.2, Marcello Carrozzini’s work “The room where the last elephant on earth was shot” is a denunciation of the concrete jungle we’re living in, where property developers are kings, and bulldozers and car honks our daily music.

Cornelia Krafft’s installation was set in what used to be the mansion’s kitchen. She invites us for “a symbolic meal into the oven of the family”, today left to decay. Entirely made from traditional loafs of bread with their smell filling the room, her work is a commentary on memory and heritage that are threatened to fade away.

Niloufar Afnan’s “Layered Landscapes” is a serie of 4 natural scenes reflected in patterns and oriental symbols painted on the walls: Garden, Pine Fields, Fountain and birds. Modern mirrors designed in an arabesque style and made of industrial materials remind us of the traditional mirrors of Damascus that were frequent in the Lebanese heritage mansions. Knowing that the house is surrounded by a large beautiful garden that was left almost untouched, according to the artist, “these scenes invite us to re-imagine the space in its once upon a time full glory and light”. 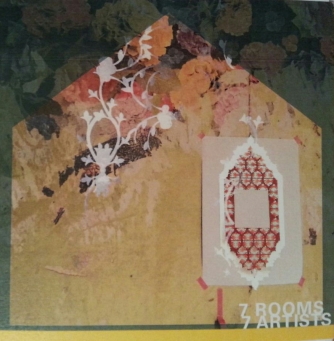 “Iteration 7” is inspired by “Beirut’s phoenix-like history of destruction and rebirth” and the concept of fragmentation, fragmentation of the city, of the body, of the history, of the whole… Gianna Dispenza develops the idea of “identities” and mutations in layered sequences, all inspired by the human body: the flesh, the skin, the fat…etc

Ana Serrano’s work “Cementerio de flores” is quite a remarkable installation. To the question of “how would you burry a flower”, the artist “grows” flower on emerging structural steel bars used in the concrete constructions that are invading the last remaining gardens of Beirut at high speed.

In the last room before you leave, on the corner side of the house facing the street, Ieva Saudargaité’s work reminds us that this neighborhood and this house in particular are threatened by the Fouad Boutros highway project. Beautiful old mansions invaded by convoys of black cars with tinted glass. No more gardens, no more heritage, no pedestrian streets and stairs… “Enough! … Silence, shhh, silence.”

The exhibition is organised by innov’Action and will stay until 30th June.